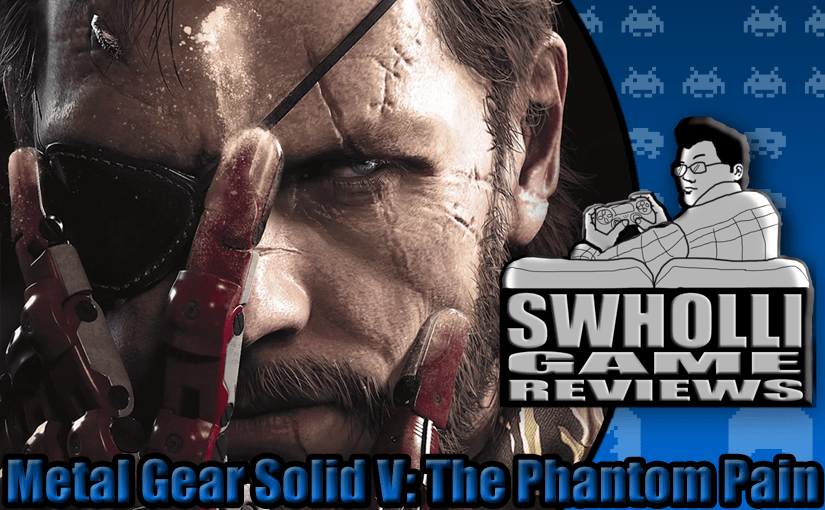 So, I pre-ordered Metal Gear Solid: The Phantom Pain and it finally arrived- and I’ve gotta say, I was and still am ecstatic to finish this game.

First and foremost, I have not finished the game yet. This is not a review that will contain story- or spoilers. I have barely been past the first mission (I was at work all day yesterday, so I didn’t get to play until 9pm). But I still want to talk about this game and what I like and don’t like. So, after the break, let’s talk about Metal Gear.

So the game starts with the mercenary spy/soldier hybrid character Snake, or Big Boss depending on what you want to call him, awoken from a coma after 9 years. I haven’t played the prequel game Ground Zeroes that was released in March of last year. Mostly because it was an over-bloated demo that cost half the price of a full title. But apparently there was an explosion of some kind at some point. Eh, I can roll with it.

It’s now the year 1984, 10 years since the Peace Walker Incident (Metal Gear Solid: Peace Walker), and 20 years since Operation Snake Eater (Metal Gear Solid 3: Snake Eater). Snake returns from his coma to find that he no longer sounds like David Hayter, but instead sounds like Kiefer Sutherland. Considering this is probably the biggest change in the series (as Hayter has provided Snake’s voice since 2005), I figured I’d address this controversy first.

I like the change. Sutherland, best known for his role as Jack Bauer in the TV show 24, is no stranger to espionage acting. As Jack Bauer he was a governement spy for over ten years. His voice is gruff, as is Hayter’s, but his infliction and delivery is more subtle. Not to say Sutherland is particularly better than Hayter (that’s a subjective claim, and I have no opinion otherwise) but the performance is very clearly unique.

I can very well appreciate the change- after-all Snake is now 49. While admittedly Hayter portrayed Solid Snake (Big Boss’ identical clone and son, the original protagonist of the series) as an decrepit old man in Metal Gear Solid 4: Guns of the Patriots (being that the genetic material of a clone ages faster than normal humans), we must also remember that Big Boss was voiced by someone else in that game, and no one seemed to mind as much. We can conclude then that Big Boss’ voice ages, and he happens to sound like David Hayter when he’s a young man in 1964, and then sound like Kiefer Sutherland as a middle-aged man in 1984, then finally sound like Richard Doyle as an old man in 2014.

As for the game itself, the gameplay is very fluid and it’s such a great improvement to the Metal Gear series. As much as I love the old Metal Gear games (specifically 1 and 3), they had really, really clunky controls. Limited camera views, only being able to directly aim while in first person, and tank-like movement. Metal Gear Solid’s biggest strength throughout the years has been its story and immersion, it has not been for stellar game play. MGSV finally takes a step in the right direction by adopting standard 3rd person shooter controls and making them its own. Is it an original design? Of course not, 3rd person shooters have been using these control schemes and player controls for years- but Metal Gear needed this.

Firing a gun is the simplest its ever been, you pull it out from a selection wheel with the d-pad, aim with the left trigger and fire with the right. It’s done completely over-the-shoulder, and the camera is never moved more than needed, but there is a first person mode for more intricate aim (and you can toggle it and keep it as default if you’re used to previous Metal Gear games). It’s simple, it’s easy, and it’s satisfying- and that’s what’s most important. In fact, that’s a great way to define the whole experience: it’s been streamlined to be the most effective and satisfying experience in a Metal Gear game yet.

The open world gives the player freedoms we’ve not seen in a Metal Gear game before. The Fox Engine is designed for multiple ways to play, and the way you choose to infiltrate your objective is entirely up to you, which is exactly as a stealth game should be. You have freedom to run and gun and rush in like a madman with a death wish, or you have the prowess to sneak in completely unnoticed by the enemy at all, or you can go in a little bit of both ways toting a silenced, sleeping dart gun, firing frantically at enemies heads, but putting them to sleep quickly. The game shines in its way your allowed to choose your experience based on your personal skill set, and the controls are accommodable and simple enough to get everyone excited.

Really, the game is an amalgamation of every game that’s come before it: GTA, Thief, Gears of War, Splinter Cell, even the original MGS. It’s all here- open world combat and driving, multiple sneaking methods, third person action and shooting, deep cerebral spy stories, and of course, all in the backdrop of the Solid Snake mythos. While none of the concepts are entirely original outside of being original to a Metal Gear game, this particular combination is so bold and ambitious in its scope that it’s new.

The only other time this kind of game was attempted before was the fabled Agent by Rockstar Games (a game announced in 2007 and decided a PS3 exclusive in 2009). But a giant, open world spy game on this scale by a competent studio hasn’t really been done until, dare I say it, today.

As for the story so far, I am a little skeptical. Kojima has a tendency to write his games like novels- lots of exposition through dialog and cut-scenes only, and a lot of the time it can get very convoluted. I remember loving MGS‘s story because it was the most concise. It was a bit muddled at times, there’s no denying that, but the characters were what made it work. Snake was an interesting hero and Meryl was an interesting supporting character. Otacon was hilarious, The Colonel was sage-like, Gray Fox was tragically sad, Liquid was goofy-hateable, and Revolver Ocelot was actually menacing. But then MGS2 is mostly unliked for its narrative and protagonist bait-and-switch. While I enjoy MGS2 as a guilty-pleasure (especially for the opening cinematic, dat bridge jump), I also acknowledge it was a pretty terrible story. Everything was a simulation? Meh. MGS3 widely considered the best of the series, however is the greatest example of strong characters- it’s a bond film homage all the way down to the intro (a schmaltzy big band tune where a seductive voice sings us the woes of the “snake eater,” all accompanied by a wild visual title sequence). But Jesus was it long in the wrong places. How many times did Volgin need to keep coming back? How many times did I need to defeat the Shagohad? MGS4 is the tale of an old man in a world that no longer needs him, trying to fit in and find his place, but good lord has it doubled its size of cut-scene both in actual length but also unneeded story. When edited together, without gameplay, the cut-scenes in MGS4 are roughly just over 8 hours in length.

MGS4 had some of the longest cut-scenes in a game to date. It pads the game out for hours more than really should be needed, and you as a player never actually get to participate. The Metal Gear games were beginning to feel like movies with occasional interactive portions rather than games with occasional cinematic portions. MGSV throws that all out the window by not only trying to make some cut-scenes interactive but by making them completely seamless to how you transition from game to cinema and back again.

So where MGS was simple, though sporadic in the sense it made, MGS2 and upwards were very long and too encompassing. What saved them was how interesting and memorable their characters were. And while I can already tell I’m going to enjoy the comradery between Big Boss and Ocelot, I also have the same inkling of doubt towards the story being concise and making a whole lot of sense. I feel like I’m going to need to spend a lot of time getting through the story missions, not because I’m a slow gamer, but because there’s going to be a lot of it. Like I said, I’m really glad that the power of modern PCs and consoles allows us to make the ingame cut-scenes completely seamless with the rest of the game, I still want to care about it.  I still want to be invested in the conflict so that the end of the game doesn’t leave me feeling cheated for having done all the actions I’ve done and left nothing better for it. Right now, this feels like the time-honored tradition of a Metal Gear game- long, dialog heavy story segments, plot threads that seem to go nowhere, and melodrama. But I really do hope I’m proven wrong.

So in conclusion, where are we at day one? Well, I’m stoked to finish this game. Based entirely on the first impressions I have from the game (and in the mindset of having beaten MGS3: Snake Eater just the day prior) I’m really happy with the experiences I’ve had so far. I’m hopeful the story will be good, and I’m interested to see how the game is divided up not only by chapters, but by an episodic structure as well.

My goal in writing this review so early is to give myself some time to develop my opinion of the game while still getting something out there to start the discussion. I won’t give a score rating yet, as there’s not enough information on my part to give an honest opinion, but I’ll do (or try to do) a follow up review in the coming days (or weeks) when I’ve finished the game’s main objective story.

If you’ve played MGSV already, what are your thoughts?

One thought on “Metal Gear Solid: Day One Reaction”